She was last seen evading the admiring glances of Tormund Giantsbane, who was delighted to find any female enter the Tinder radar of Castle Black.

We have also watched her smoulder in a steaming-hot bath tub with a naked and apparent platonic Knight-peer, Jaime Lannister, the Kingslayer.

Whilst her past with Renly and Jaime leads her Facebook relationship status to read “It’s complicated”, her confused emotions do not detract from the fact that, in my view, Brienne of Tarth possesses many of the essential characteristics which would make her the best lawyer in the Seven Kingdoms.

Brienne of Tarth would make the best lawyer in Game of Thrones. And here is why: 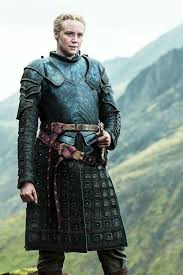 In a profession reliant on its officers being good to their word, who better to oversee the course of justice than the wielder of the “Oathmaker”? All good lawyers have an ethical duty to be honest. Brienne prides herself on her honesty and her integrity. She is the one character who, throughout the series’, cannot be said to have deceived anyone to aid an ulterior motive or to support her own personal agenda. Her integrity is visibly seen in her quest to become a knight. She is a stickler for procedure. Even when she meets Stannis Baratheon, for whom she has been relentlessly searching for to avenge the death of Renly, she maintains her cool, follows procedure and offers Stannis with the opportunity for some last words with no one else around to hear them. This unfailing integrity would be required in the legal profession.

When confronted with uncontrollable members of the Stark clan who had pillaged their own people, Brienne has no issues with giving them their just deserts. This is because she knows her loyalty lies with Catelyn Stark specifically and not the Stark clan as a whole. She has no ambitions of her own and acts only in Catelyn’s best interests. Brienne can already see where the boundaries of a conflict of interest lie. Throughout the series’ she shows immense loyalty to both Renly and Catelyn Stark, and goes so far as to state that their deaths do not release her from her vows. Brienne would do anything for her clients, and would generally always put their needs ahead of her own.

Brienne’s loyalty is exemplified in her resilience when undertaking tasks on behalf of Catelyn and Renly. It is safe to presume she would show the same determination when undergoing work for a client. The fact that Arya and Sansa Stark are presumed dead does not deter Brienne from searching for them. Where many had failed previously, Brienne is successful in locating both of them relatively quickly. Even when she is told by Sansa that she does not want her help, Brienne stays in close contact with her to ensure her safety and to be there when she did need assistance. Many again would have given up at this stage, exemplifying that her perseverance often eventually brings success. 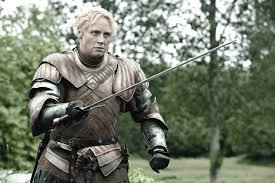 It is fair to say that Brienne is not one to shirk away from getting her hands dirty and certainly not one to back away from a fight. Throughout the series’ she separately takes on two of the best swordsmen in the land in the shape of Jaime Lannister and the Hound. Despite facing formidable opponents, her resilience is rewarded on both occasions. An opponent who is easily underestimated is always a dangerous one and this applies in legal circles too. Brienne’s self-belief and fearlessness would ensure that she strives to obtain the best result for her clients. 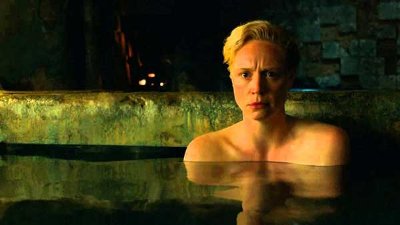 I personally would never want to play poker with Brienne. Her facial reactions give very little away. Who can forget that emotionless, over-the-shoulder smoulder which she shared with Jamie Lannister in that bath tub? Even when thrown in that pit with a bear and nothing but a wooden spoon to protect herself, her expression remained stoic. An important part of being a lawyer is being able to detach yourself emotionally from any situation which allows you to remain objective. You require to stay cool under pressure and not lose focus of what you are arguing for. Combine this trait with Brienne’s fearlessness, and who else would you want fighting your corner in a courtroom?

So she can’t ride a fire-breathing dragon. Nor can she come back from the dead or harness the fire magic. However it’s Brienne of Tarth who possesses the characteristics required to make her the best lawyer in the Seven Kingdoms.

Brienne’s unhinged loyalty and fearless approach to confrontation would make any client comfortable in her shadow. She would literally (and figuratively) fall on her sword for her client.

Forget about “Game of Thrones”. Brienne of Tarth is the “Dame of Tomes”.

This post was originally published here: Who in Game of Thrones would make the best lawyer?